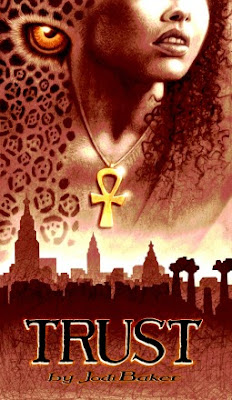 TRUST is a young adult, mythological, urban fantasy thrill ride about the darkly fantastical, supernatural Museion that has secretly protected humanity’s greatest treasures for millennia, and Anna, the sixteen-year-old New York girl who is the unknowing Heir to it all:

TRUST.
That’s what the voice inside my head kept repeating when I woke up between the infamous lion statues of the New York Public Library, with no idea how I got there and no memory of the last year of my life.

The only person I ever trusted was my mother, who lied about everything.

I want to trust myself, despite my missing memories. But hearing a voice inside my head obviously isn’t a good thing, especially since it know things I don’t… like how to speak Ancient Sumerian, the fact that yellow-eyed people aren’t actually people, and that my mother’s Egyptian ankh necklace was the key to unlocking the truth she was hiding:

I’m the last in a long lineage of powerful women whose secrets date back to the ancient Library of Alexandria.

I’m fighting like hell to stay alive while searching for both my missing mother and the truth, desperate to find something or someone I can trust.

Q: What inspired you to write Trust?

I had a dream about that I was following a young woman in a muddied and bloody toga, running up a gray and white marble, spiraling staircase that seemed to have no end. As we raced up, up, and up, she kept trying to gather up these ancient books and scrolls that were piled on the steps. I would always wake up before I could find out what was chasing us, or why she was trying to save books and scrolls.  I told a friend of mine about the dream. I said: “I really want to know who she is and what she was running from.” My friend, who happens to be an incredible playwright, said, ever-so-seriously: “Write it and find out.” That gave me the courage to begin!

Q: How did you start writing YA fiction? Were you a fan of it already?

The most important, soul-searing books were those I read between the ages of nine and eighteen. I always felt that those writers took me seriously, even though the world around me didn’t yet. I write the kinds of book that I love to read, which is why it’s a thrilling honor to be a Young Adult Author.
Q: What is your favorite YA book or series?

I love to read as much as I love to write (my walls are lined with books instead of wallpaper!) so I’ve got a HUGE list! My YA Must-Reads always have a kick-ass female heroine and take place in an intricate, intoxicating world I’d love to live in, like Laini Taylor’s Daughter of Smoke & Bone trilogy, Kendare Blake’s Antigoddess, and of course, anything by Cassandra Clare. I adore urban fantasy that takes place in/alongside our mortal world, like Shadowshaper, by Daniel Jose Older, but right now, I’m obsessing over Sarah J Maas’s stunning A Court of Thorns and Roses fantasy series.

Q: The Arriviste has stated that Trust is "America's answer to Harry Potter...". How does it feel to have that kind of praise and would you consider your book to be another Harry Potter-esque novel or something entirely different?

To see TRUST mentioned in the same sentence as Harry Potter was a total out-of-body experience! When I read that review, I literally fell off my chair. The Arriviste review pointed out that the two series have characters that are born into extraordinary circumstances that they knew nothing about. Anna and Harry both find themselves forced into epic supernatural wars that began before their time. Both are gifted with the enormous responsibility and opportunity to make choices that will affect our destiny. Both series have a world that expands and characters that grow within each book. I love that Harry Potter has mysterious British castles and a magical world ruled by wizards. I also love that TRUST has a diverse, ‘melting-pot’ set of characters that walk right out of ancient mythology to fight each other in the cement and steel, high-tech world of modern-day New York City. The biggest difference is that TRUST has a female heroine, which is intrinsic to the story of the Between Lions Series. I would be beyond ecstatic if readers related to Anna, Styx, and Cax as they do to Harry, Ron, and Hermione. That is every writer’s dream!

Q: Which of your characters is your favorite?

Anna rescues boys from prisons, fights off Werejaguar attacks and always makes a way out of no way. One of my favorite lines in TRUST is when she realizes: “Yesterday things happened to me. Today I want to be the Girl Who Happens To Things.” Anna Perankios is my extraordinary hero.

Q: Do you have advice for aspiring authors?

I recently spoke on a panel about how to ‘Unlock Your Inner Creativist’, which you can check out on my JodiBakerAuthor Facebook page. I also created a set of inspirational Writing/Creativity Rules, which are posted at http://www.jodibakerbooks.com/muse-ings-blog. The best advice I have is what my amazing friend told me: If you have an idea, whether it’s a line of dialog, a character, or a place you see in your head, give yourself permission to follow that spark of curiosity on the page, to ’Write it and find out!” 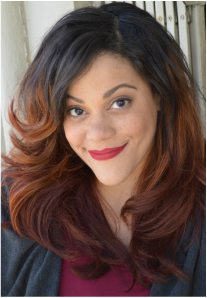 As a child the only punishment Jodi ever feared was not being allowed her weekly visit to the library. At boarding school, though an enthusiastic student, her late night reading fests frequently made her late for first period. Luckily, it was a high school for Performing Arts, where the classes she was good at (writing, theatre, dance & visual art) happened in the afternoon. After attending Carnegie Mellon University, she spent several months performing plays on the island of Cyprus, which was where she fell in love with mythology. When she returned to the U.S.A. Jodi lived in New York City. After a summer of working as a tour guide for the Natural History Museum, Jodi developed an addiction for wandering through all of NYC's incredible Museums - especially the Metropolitan Museum of Art. She also spent many hours sitting between the infamous library lions dreaming up the kinds of books she wanted to create. Now she happily lives in Los Angeles with two Anubis-y looking dogs in a house lined with books instead of wallpaper. Jodi Baker loves writing & reading Young Adult Urban Fantasy Mythological stories tinged with romance. In addition to her young adult BETWEEN LIONS series, Jodi is also working on a middle-grade fiction fantasy series.

TRUST is her first book.

JODI BAKER'S TRUST: "MUST READ YA"

What Other Bloggers Are Saying:
~“I enjoyed this book from the beginning. The story and plot line were very intriguing and unique from the start. Baker seems to have a lot of interesting ideas planned for this series.”
- Mad Tea Party Book Reviews (award winning blogger)

~“I was pleasantly impressed with this novel”
-Ian Wood’s Novellum

Between Lions Press will randomly choose the winner from those who have liked my Facebook Page and contact them privately and send them the book.
Prize: an e-book copy of Trust
Giveaway Start: September 1st
End: September 16th
How To Enter: Like the LivTheBookNerd Facebook page!
Good luck! May the odds be ever in your favor! 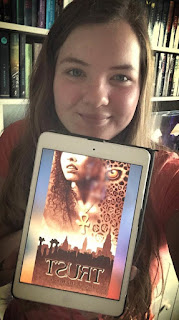