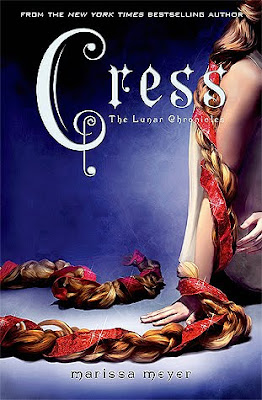 Where To Find It: Goodreads // Amazon

Even in the future. there are damsels in distress...

In the third installment of the Lunar chronicles, Cress, having risked everything to warn Cinder of Queen Levana's evil plan, has a slight problem. She's been imprisoned on a satellite since childhood and has only ever had her netscreens as company. All that screen time has made Cress a great hacker. Unfortunately, she's just received orders from Levana to track down Cinder and her handsome accomplice.
When a daring rescue of Cress involving Cinder, Captain Thorne, Scarlet, and Wolf goes awry, the group is separated. Cress finally has her freedom, but it comes as a high price. Meanwhile, Levana will let nothing prevent her marriage to emperor Kai. Cress, Scarlet, and Cinder may not have signed up to save the world, but they may be the only hope the world has.

I have been meaning to finish the Lunar Chronicles for ages, and I've finally done it! During the past couple weeks, I've read the last two books in the series. I have no idea why I put it off so long because I absolutely adored the series then I started it! While reading Cress, I found that I liked Cress so much more than Scarlet. I'm not sure what it was -- my mood while reading, the pace, or maybe I was slump-y when I read Scarlet, but while reading Cress I enjoyed it so much more. I had read Cinder when it first came out in 2012, and I was totally in love with Cinder and Kai's story. Marissa Meyer's writing style and the whole premise of the book was so amazingly done, and I fell in love instantly. When I reread Cinder last February, my feelings did not change over time. Marissa Meyer's writing is so beautiful and well crafted.

This book is full of humor, romance, budding romance, kick butt action, new characters, new settings, and amazing character and plot development. The book begins with a couple chapters in Cress's POV and sets up a good foundation to her character, but then quickly switches to chapters narrated by the rest of the gang. Every word in the book contributes to something that will occur in the finale. The new characters keep you on the edge of your seat, and there is never a dull moment. The addition of Cress  The book is at just the right pace, it's not too fast and it's not slow at all. It's just the right pace, to be honest.

Cress is such a sweet character, and it was an awesome experience to be able to know her better as the book went on, and to see her grow into herself and become who she truly was. Cress is quite innocent and naive, but it isn't unrealistic at all. I found her whole demeanor to be very natural and believable. I totally ship her with Thorne. I think his confidence and swagger compliment her shyness and naive nature. Cress fits in nicely with the gang and their banter. when they are all together, is really fun to read.

Overall, this book was an excellent addition to the series, and I would say that I look forward to the next book, but I've already read it so keep an eye out for that review

Retellings You Will Love:
Happy reading!